On Jan. 25th at Rektorska 4 in Warsaw, Visegrad/Insight and the American Center Warsaw corganized a women-leaders’ expert conference: #WomenAreNATO.  This women-panelist-only conference gathered multiple voices of different women-leaders and high-level female opinion-shapers are put together to develop stronger and broader dialogue on how to jointly defend the core values of the democratic world, especially these ensuring security and peace.

We all had an immense pleasure to hear messages from H.E. Leslie Scanlon, the Ambassador of Canada to Poland, and H.E. Orsolya Zsuzsanna Kovács, Ambassador of Hungary to Poland. Though both countries have own agendas and pace of women engagement, Ambassadors were both convince of the necessity and importance of female participation in public discourse. We also could hear their own experiences from their career path.

The proceeding message from Clare Hutchinson, NATO Secretary General’s Special Representative for Women, Peace and Security, was also very loud and clear, underlining NATO’s commitment to developing women agenda in its Peace and Security actions. NATO, therefore, spends much of its efforts to make women active and equally represented in the security world.

The first panel discussion gathered fantastic experts: Małgorzata Bonikowska, President, Centre for International Relations (CSM), Szabina Maguire, Foreign Policy Analyst, Justyna Skrzyńska-Rękawek, 2nd Lt, ABM in the 1st Regional Control and Reporting Centre, and Katarzyna A. Przybyła, Senior Editor at Polityka Insight, Supervisor of International Peace and Conflict Studies at Collegium Civitas, who discussed ​NATO – it’s activities, priorities, and our engagement in the debate about future of the Alliance, and EU-NATO relations. All agreed that apart from securing peaceful, stable and democratic political order, security in terms of military and defense, the definition of security there includes also securing our culture and our values (such as freedom of speech or media freedom, and gender equality among others), as well as ecomonic and humanitarian values. Such approach implies engagement with all social groups, including women. Taking this definition into account, security is also the matter for women, and their role is crucial and might be very different to what they imagine.

The second message from distingished Sarah Price, the Director for Defence and International Security at the Foreign and Commonwealth Office, UK, explained that Brexit will not in any aspect affect the UK involvment in NATO, especially in the face of Russia posing more bold threats to the western values. This message constituted a great introduction to panel two, chaired by Arleta Bojke, journalist and long-year correspondent in Moscow, and featuring  Anna Visvizi, DEREE – The American College of Greece, Research Director at the Institute of Central Europe (earlier the Institute of East-Central Europe), Olena Suslova, Chairperson of the Board of Directors Women’s Information Consultative Center, Ukraine, and Eto Buziashvili, Programs Director and Research Fellow at the Georgian Strategic Analysis Center. The panel has held an inspiring discussion on how Ukraine and Georgia perceive Kremlin’s actions, and how much they need stability and peace in their territories.

We are more than grateful to our outstanding speakers, numerous audience, and great partners – NATO PDD and US Embassy Warsaw, for making this unique event a success! Together, we have proved that women do have a say and should take an equal part in security-related discussions.

See full recording and photos from the conference at our Facebook. 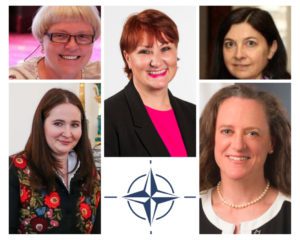 NATO after Brussels: WHAT’S DONE and WHAT’S NEXT. Challenges & future.

WHAT WILL RUSSIA DO? NATO-RUSSIA RELATIONS

Leslie Scanlon (BJ, Carleton University, 1986) joined External Affairs and International Trade Canada in 1990. She served in federal regional offices as a trade commissioner: Industry Canada in Halifax (1990 to 1991), and Agriculture and Agri-Food Canada in New Westminster (1996 to 1998). Overseas, Ms. Scanlon served in Tokyo, where she was second secretary, fisheries and agri-food (1992 to 1996), and in Paris, where she was minister-counsellor, communications and public affairs (2007 to 2011). Her most recent positions include director general assignments: client relations and mission operations, Foreign Service Directives and consular operations.

Orsolya Zsuzsanna Kovács was born in Budapest and has had strong links with Poland since her early childhood. As a primary school student, she spent four years in Warsaw, where her father worked as a diplomat. She has authored numerous publications in both Polish and Hungarian, including the book Lengyel Mozaik (Polish Mosaics), which contains fourteen interviews with famous Poles, including Lech Walesa and Andrzej Wajda.  She was appointed Ambassador of Hungary to Poland in early 2017.

Clare Hutchinson has served as the NATO Secretary General’s Special Representative for Women, Peace and Security since January 2018. She is the high-level focal point on all aspects of NATO’s contribution to the Women, Peace and Security agenda, with the aim to facilitate coordination and consistency in NATO’s policies and activities and to take forward the implementation of the NATO/EAPC Policy and Action Plan on Women, Peace and Security. Earlier, Ms Hutchinson worked as a Senior Gender Adviser with the United Nations for over a decade. She has been instrumental in setting the strategic development of Women, Peace and Security for the United Nations Department of Peacekeeping in New York, Kosovo and Lebanon. Born and educated in Newcastle Upon Tyne, United Kingdom, Ms Hutchinson started her career in broadcasting and public relations in Canada and the United Kingdom. She later obtained her Masters of International Relations and Masters of Research from Newcastle University. She moved to Canada in 1991.

Dr. Małgorzata Bonikowska specializes in international relations, European Union and political marketing. Furthermore, she is a government consultant and academic fellow, as well as the she president of CIR and co-founder of THINKTANK institute. Dr. Bonikowska graduated from the Warsaw University (Italian studies), University of Paris-Sorbonne (history and political sciences) and the PWST (history of culture). She completed two Ph.D. programs: in Poland (PAN) and abroad (RSM) as well as a specialization at Columbia University in New York (political sciences and international affairs, Fulbright program). She is author of more than 150 publications and tutor of over 100 Bachelor and Masters thesis.

Katarzyna A. Przybyła is a Senior Editor at Polityka Insight, and a Supervisor (and an author) of International Peace and Conflict Studies Program at Collegium Civitas in Warsaw. She was a Fulbright Scholar in the Kroc Institute for International Peace Studies (University of Notre Dame) in the academic year 2014-2015. In 2018 – GMF’s Marshall Memorial Fellow. For more than 7 years she worked in the National Security Bureau’s Strategic Analysis Department, focusing on the former Soviet Union, NATO-Russia relations, international peace and security organizations, and arms control. She also served as a Program Development Adviser in the Peace and Stabilization Program in the Casimir Pulaski Foundation, and worked as a journalist in a Polish newspaper “Dziennik Gazeta Prawna”. She graduated from Lazarski University, Warsaw (BA and MA in International Relations), and University of Notre Dame, IN, USA (MA in Peace Studies).

Justyna Skrzyńska-Rękawek is 2nd Lt, ABM in the 1st Regional Control and Reporting Centre. She has graduated from Polish Air Force University with an engineer degree in Tactical Navigation, postgraduate in Airports’ Safety and master in Navigation and Airspace Management. She has also gained an international experience studying at University of Defense in Brno and participating in International Military Academic Forum. Justyna has participated in many international conferences regarding Air Safety and Air Traffic Management and is an active publisher in the branch. Before joining the military, she gained business experience working for large international companies. Her interest are foreign relations and defense and with focus on NATO alliance and world conflicts. She is an alumni of Transatlantic Future Leaders Forum 2018 internship program and was working on foreign affairs in the Congressional Office in Washington, D.C.

Szabina Maguire is a foreign policy expert who has experience of working for the Hungarian civil service. In her last role she was a senior advisor in the Ministry of Foreign Affairs and Trade with special focus on NATO relations. Her field of expertise is Russian contemporary foreign policy. Szabina is a freelancer living in the UK now,working with the British Army, Transparency International and Visegrad/Insight.

Sarah Price serves the role of the Director for Defence and International Security at the Foreign and Commonwealth Office, UK. Earlier, in 2013 she had been appointed Her Majesty’s Ambassador to Finland. Ms Price joined the FCO in 1990 and has worked primarily on European issues, including postings to Prague and Belgrade. In 1999, she was seconded to the Foreign Ministry in Helsinki where she worked on Finland’s first Presidency of the European Union.

Anna Visvizi, political scientist and economist, editor and research consultant with extensive experience in academia and the think-tank sector in Europe and the US. Dr. Visvizi presented her work in many forums across Europe and the US, including Capitol Hill. A practiced team-worker, researcher, analyst and lecturer, Dr. Visvizi’s expertise spans the following interrelated areas of research: political economy; migration; smart cities; innovation, competitiveness and policy-making; with the geographical focus defined by the EU, China, the Arab World.

Eto Buziashvili is a Programs Director and Research Fellow at the Georgian Strategic Analysis Center. Prior to GSAC, she served as an advisor to Deputy Secretary of the National Security Council (NSC) of Georgia. She was advising and assisting the Deputy Secretary of the NSC on national security and foreign policy issues. Prior to her work at the NSC, Eto served as a senior analyst at the Analytical Department in the Ministry of Internal Affairs, where she focused primarily on issues related to the occupied territories of Georgia. During this time, she assessed and analyzed developments in the occupied regions to produce critical policy documents. Eto prepared materials for the Geneva International Discussions, which addressed the consequences of the Russian-Georgian war of August 2008. She was one of the negotiators at the Incident Prevention and Response Mechanism meetings – a communication format with representatives of Russia and separatist Governments of Georgia’s occupied regions. Eto holds MA degree in International Relations from Georgian Institute of Public Affairs (GIPA).

We are based in Poland and we use cookies on our website to give you the most relevant experience by remembering your preferences and repeat visits. By clicking “Accept”, you consent to the use of ALL the cookies. Privacy Policy
ACCEPT
Manage consent

This website uses cookies to improve your experience while you navigate through the website. Out of these, the cookies that are categorized as necessary are stored on your browser as they are essential for the working of basic functionalities of the website. We also use third-party cookies that help us analyze and understand how you use this website. These cookies will be stored in your browser only with your consent. You also have the option to opt-out of these cookies. But opting out of some of these cookies may affect your browsing experience.
Necessary Always Enabled

Any cookies that may not be particularly necessary for the website to function and is used specifically to collect user personal data via analytics, ads, other embedded contents are termed as non-necessary cookies. It is mandatory to procure user consent prior to running these cookies on your website.